PUBG Releases Impressive Stats Of The Game During Early Access

PUBG Releases Impressive Stats Of The Game During Early Access

Playerunknown’s Battlegrounds also known as PUBG has become one of the most popular games in recent history. The game has drawn in much attention around the community with the game ranking at the top in terms of Twitch streams. And to show how well the games been doing in the Steam marketplace, PUBG has revealed some interesting stats. 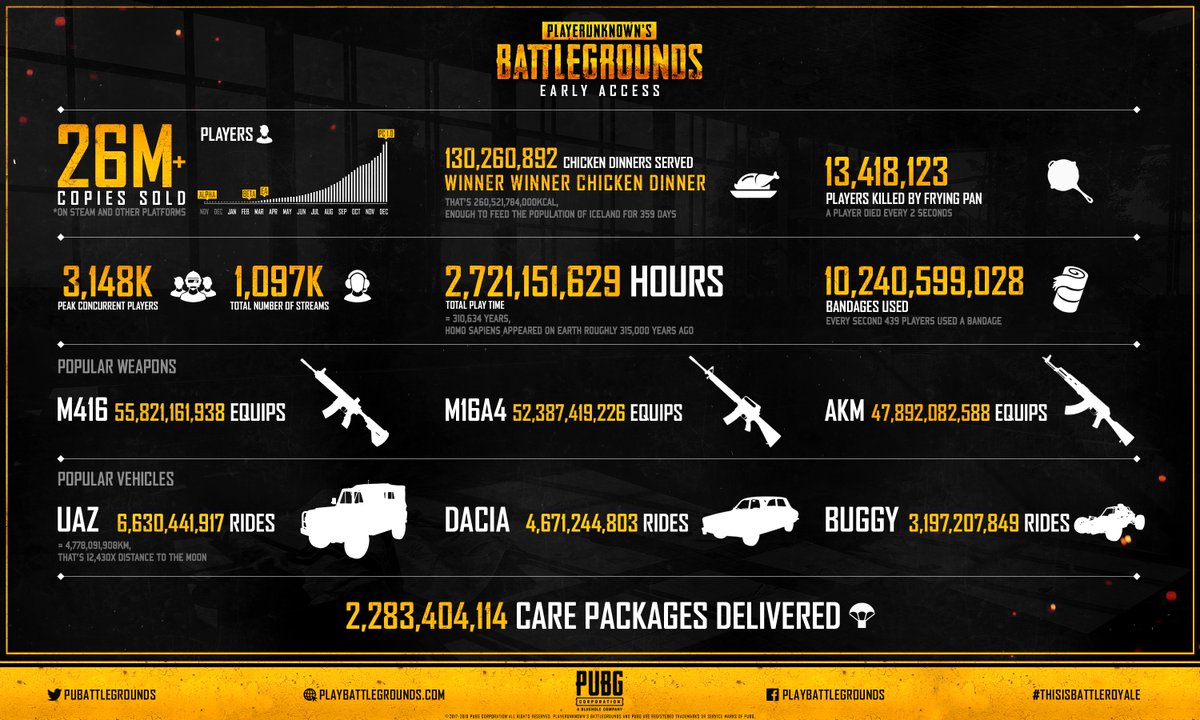 In the picture above you can see that PUBG, owned by Bluehole, has sold over 26 million copies of the game. That puts the game up there with some of the highest selling AAA titles of all time. As a soft estimate, we predict that PUBG has made around $780 million dollars if we put every game around the $30 MSRP mark.

Users of PUBG have also played over 130 million rounds in the game which is insane to think about. To go along with that statistics is that over 13 million people have been killed by a frying pan. Usually, that takes some coordination and luck.

PUBG has also been able to achieve a massive 3.148 million concurrent users playing the game at the same time with over 1.097 million streams. The game has been played over 2.7 billion hours which is equivalent to around 310,634 years. That is a lot of playing time for just one game.

Some of the other fun facts about PUBG

Players have used over 10 billion bandages in the game. That’s equivalent to 439 players using a bandage every second. There has been over 55 billion M416 equips, 52+ billion M16A4 equips, and 47+ billion AKM equips.

As far as cars go, players have driven the UAZ over 6 billion times, the Dacia over 4 billion times, and the buggy over 3 billion times. Oh, and there have been over 2 billion care packages to drop on the map.

It’s no wonder why Microsoft is rumored to be looking to acquire PUBG from Bluehole. We estimate that the deal will have to be in the multiple billions to buy out this popular franchise. PUBG has only been around for a littler under a year now which makes the stats even more impressive.

PUBG came out with the full release on December 20, 2017. In the same month, PUBG was introduced to Xbox and is making killer sales there as well.