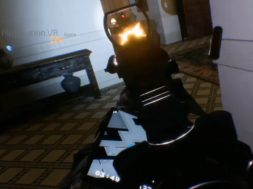 So far, a lot of new games have been announced for PlayStation VR during the PSX 2017 event. On stage, the Sony team announced a new upcoming PSVR FPS game called Firewall: Zero Hour. This will be a new tactical shooter game developed by First Contact Entertainment.

Firewall: Zero Hour will be a 4 vs 4 multiplayer game where players are equipped with various weapons and tactical devices such as radars, grenades, etc. The two teams of mercenaries are hired by anonymous contract handlers to either proetect or obtain highly sensitive information on a laptop in dangerous and exotic locations around the globe.

Each team’s anonymous contract handler acts as their “eye in the sky” and guides each match by providing objectives and critical mission information along the way. Their only concern is the data and they are willing to pay out out handsomely for it.

Players are rewarded in-game with cryptocurrency and those currencies are then used to upgrade contractors, weapons, equipment, load-outs, and cosmetic customization. The game will be playable with Dualshock controllers and the aim controllers.

The game is stated to release some time in 2018 without a particular date beyond that.