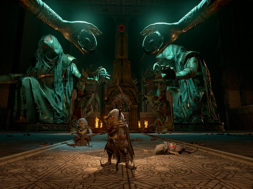 Mage’s Tale kicks off the VR game by first placing you as a lowly apprentice who must annihilate a series of foes and learn to command the mystic arts in order to save your master. You’ll be fighting against the evil wizard Gaufroi and must find a path to vanquish him. As you progress throughout the story, you’ll start to gain mysterious powers of elements such as water, fire, and ice.

“One of the benefits of developing The Mage’s Tale and The Bard’s Tale IV at the same time is that it allowed us to create an even deeper world for both games to be set in,“ says President Matthew Findley. “By weaving together the stories legends, characters, and settings, both products benefit from more content and more history in the world. I’m confident no other VR game has created a world as deep as what The Mage’s Tale has to offer.”

The game is optimized for the Oculus Touch and will feature ten different dungeons to visit which will account for over 10 hours of gameplay. This will be inXile Entertainment’s first big project for VR. Make sure to give it a go on the 20th!