Home Music Post Malone Will Be Joining The Bud Light Dive Bar Tour And You Can Watch it For Free
Music
news
March 22, 2018 SJ Kim 0 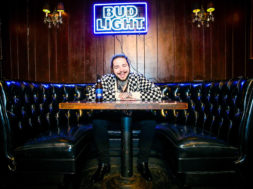 Post Malone is one of the hottest hip-hop artists around right now and has been making some big moves as of late. On top of joining up the lineup for Coachella, Bud Light has announced that Post will be headlining at the brand’s popular Dive Bar Tour this spring.

Prior to releasing his next solo studio album and performing for sold-out festival crowds later this summer, Post Malone will take the Bud Light Dive Bar stage to perform for an intimate crowd in Nashville on Wednesday, April 4.

Following-up on crowd-pleasing Dive Bar Tour performances in years past, which have featured Lady Gaga, John Mayer and G-Eazy, Bud Light is continuing the popular series in 2018 with artists that they consider friends and fans of Bud Light.

“It feels super cool to be the next artist to perform on the Bud Light Dive Bar Tour. If you know me, you know I love my Bud Light.” said Post Malone “I can’t wait to get weird with ya’ll in Nashville.”

This year, The Bud Light Dive Bar Tour will share some surprises in advance of each show to get music fans even closer to their favorite artists. As in previous Dive Bar Tour shows, Post Malone could also be joined by some surprise musical friends during his performance.

“Post Malone has been a long-time friend and supporter of Bud Light, so when we were thinking of artists to collaborate with in 2018, it was a no brainer to look into working with Post,” said Andy Goeler, vice president, Bud Light. “We worked with Post Malone and his team on a program titled ‘One Night Only’ last year and we were thrilled with the fan response and we love that he always has a Bud Light in-hand while performing. We can’t wait to see what he brings to his Dive Bar Tour performance in Nashville next month.”

Post Malone’s Bud Light Dive Bar Tour stop will take place in Nashville on Wednesday, April 4 and will be live-streamed on the Bud Light Facebook and Twitter pages for you to experience the show live from anywhere in the country for free.