Post E3: Where VR Studios Are Headed In The Near Future 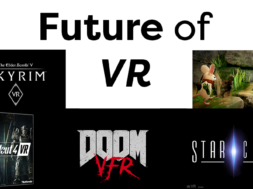 Post E3: Where VR Studios Are Headed In The Near Future

This year’s E3 was full of excitement and refreshing takes on conventional VR content. During some of the pre-announcements by PlayStation and Bethesda we were able to see some of the upcoming VR games for the HTC Vive, Oculus Rift, and PlayStation VR. And while in attendance at E3 we were able to try out some of these unique IPs and see how studios are shifting their mindsets on the VR platform.

When it came to Bethesda, it seemed as though that their goal was to bring content that was higher quality and longer in length versus the traditional VR games we see today. While we’ve seen Fallout 4 and Skyrim on regular consoles, this is the first time that the games will be coming to the VR platform. Bethesda has made it a goal and priority to have these games fully adapted on to the virtual space for us to spend a ridiculous amount of time in.

We know that Fallout 4 can already draw in nearly 40 to 50 hours of gameplay in just finishing the story. Think about doing that in the virtual space. We’ve never seen a VR game of this caliber and the same goes with Skyrim VR. The only difference we might have to consider is which platforms we utilize. We know that PlayStation VR doesn’t have anywhere near the computing power as conventional PC rigs so it might be hard for people to pace themselves when playing a VR game like Skyrim VR on the PSVR (I know, there was a lot of “VR” in that sentence).

Other studios such as Polyarc have come up with an idea that’s quite refreshing to what we see today in the marketplace. Moss was a highlighted VR game during PlayStation’s presentation at E3 this year. They showcased how the game takes place in a miniaturized world with a heroine named Quill. The game has a stationary camera which allows you to stay positioned in third person view for you to see all of the details in the game. You do have the ability to move closer or further away from the character by simply leaning which is quite wonderful. But the game itself promotes the idea that not every VR game needs to be first person in order to have an immersive experience.

Additionally, we were quite impressed with the quality of gameplay on PlayStation VR for Moss. The studio has done an impressive job in keeping the framerate up and the users like me not feeling the motion sickness. With high quality graphics we saw in the game, it was startling to see how far we’ve come in this short period of time within the VR industry.

Playful Corp was another company we were quite impressed with. The company better known for Lucky’s Tale has recently showcased their next upcoming IP, Star Child. And this isn’t a conventional VR game. Playful has taken a unique approach where they wanted to include a side-scroller within the VR space. When we first heard about it, we imagined it to be some low-quality build with awful gameplay but it turned out to be the total opposite. Somehow, Playful was able to bring a new compelling way to play a VR game re-inventing an old concept.

You can feel the story build naturally with the flow of the side-scroller feature in Star Child. It does a great job highlighting the character and the importance of the story. This particular title is also in third person view like Moss which allows you to take in all the beautiful details that the studio has included. You can lean in to take in the beauty imagined by the artists and the magical flow of the game.

What are your thoughts to these new concepts coming to the VR platform?