Most Positive Rated VR Games In The Last 30 Days 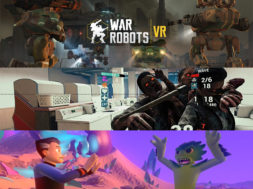 Most Positive Rated VR Games In The Last 30 Days

This year alone we’ve seen releases of hundreds of VR games for the Vive and Rift VR headsets. Some of the most notable games of the year so far were Robo Recall, Lone Echo, Superhot VR, Arizona Sunshine, Mindshow, and more.

In the next few months we’re going to be seeing a massive rollout of AAA VR content which includes:

While these are all excellent titles, there are many VR games that users are enjoying today. Thanks to a Reddit user named sergioberg79, we can see the most positive rated VR games in the last 30 days. While we are familiar with many of the list titles, some of the games came in as a surprise.

The next highest rated VR games in the last 30 days is ZomDay by Into Games with 132 new positive reviews. The game features a zombie filled world where you must take down the undead as a member of S.E.A.T (Special Event Action Team). This is a fast pace VR shooter game that contains multi-player modes and bosses that’ll surely put up a challenge. Zomday is available today for $9.99 on Oculus Rift and HTC Vive.

The third highest rated VR experience in the last 30 days is Mindshow by Mindshow Inc. Mindshow lets you make animated movies in VR with your body and voice. Players can become animated characters where you can act out a show and share it with your friends. Mindshow is available today for free, which makes it highly attractive.

Make sure to check out the other listed games as well if you are looking for a VR game to play.