Population: One Is Looking To Be The Go To Battle Royale Game In VR 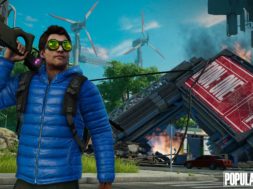 Population: One Is Looking To Be The Go To Battle Royale Game In VR

Battle Royale games are currently dominating the market with titles such as PUBG and Fortnite. And now a new battle royale game by Smashbox Arena Studio looks to make its debut in virtual reality called Population: ONE.

In the trailer above you can see it has some similar characteristics to Fortnite with bright colors and crafting abilities. Players will be able to climb, construct, fly, and more.

The map will be quite expansive with one square kilometer of playing space. Players will be able to climb virtually everything they see. You will also be able to glide into battle and travel along distance with rocket boosters strapped to your back. And yes, the world will be closing in on you with boundaries.

Population: ONE will be available as VR Crossplay Multiplayer and Single Player Missions. You can play online solo or in teams using the HTC Vive, Oculus Rift, and Windows Mixed Reality headsets. In single Player Missions, you’ll be able to practice FreeMotion tactical skills against AI and drones that will be hunting you down.

If the VR battle royale game sounds interesting, you can sign up for their private beta program today to test out the upcoming title. While there are certainly other VR battle royale games out there, Population: ONE looks to be the most polished with advanced features that are not seen in the other games.

The studio has yet to state a particular launch date other than saying that Population: ONE will be available in early 2019. Stay tuned for updates about this upcoming game.