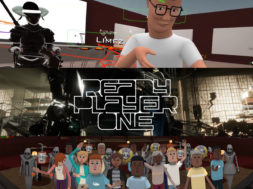 There’s currently a lot of social VR platforms available where you can hop in to the virtual world and socialize with strangers and friends wearing various avatars. While VR is a fairly new technology, it seems to be making a trend within the online gaming community.

Here are some of the various social VR platforms that you can log onto and hang out with strangers and friends in VR.

Currently, VRChat is probably one of the most popular social VR application available on the market. Thousands and thousands of users hop on everyday to hang out and chat in the virtual world. Celebrities such as Pewdiepie and Deadmau5 were recently seen using the application and exploring the vastness of the foreign virtual world.

What makes VRChat so attractive versus the other competitors is that you are able to create your own unique avatar and upload it on to the platform. You’ll see famous characters such as Pikachu, Goku, Naruto, Hank, and many many more.

On top of that, users are able to create their own virtual worlds and themed areas which makes the space so much more unique. You’ll come across racing tracks, theme parks, forests, bars, and more.

And of course it being an internet application, you will run into some strange and weird people that makes for an unusual time. You will encounter atypical situations but that’s all a part of the VRChat community. For those of you interested in VRChat, you can download it for free on Steam and is available as a desktop app as well if you don’t have access to a VR headset.

AltspaceVR has been another popular social VR application but is more honed towards people looking for unique virtual experiences. So far, AltspaceVR has hosted famous celebrities such as Bill Nye the Science Guy, Al Roker, Reggie Watts, and many more.

These celebrities have provided a unique form of virtual entertainment whether it be through a discussion panel, PR, or stand up comedy which makes it a unique platform versus VRChat which is more of a free for all. AltspaceVR is also more organized where users can look through the featured events section and check out any upcoming shows.

AltspaceVR did have a bit of a spiral last year where they announced that they were shutting down. However, things are looking up for them now as Microsoft acquired AltspaceVR a couple months back. They will now be a part of the microsoft mixed reality family and provide a virtual space for the platform.

AltspaceVR is available for free on Steam and is available as a desktop app if you don’t have access to a VR headset like the Oculus Rift of the HTC Vive.

Sansar is an upcoming social VR platform by Linden Labs, the creators of Second Life. They will be tackling the virtual platform in the near future with their background in providing a second world for people to escape to.

They’ve recently released a virtual walkthrough experience based around the upcoming movie Ready Player One where you get to check out Aech’s garage. Inside, you’ll run into some iconic characters such as the Iron Giant and will be able to interact with the environment around you to some degree.

You’ll also notice that the graphics in Sansar are a lot sharper and more realistic looking compared to the other two social VR platforms. Sansar has been focused on providing a more realistic feel than the cartoony ones we see with VRChat and AltspaceVR.

Sansar is still pretty much in its beta phases and will look to make a mark in the social VR space in the near future. You can download Sansar today for free and use it through a VR headset like the HTC Vive. You can also access the space through desktop if you don’t have access to a headset.