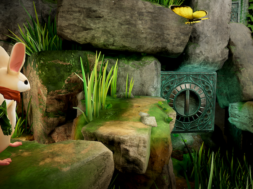 Sony had an impressive showcasing today at their press conference introducing many awesome VR games including Skyrim VR. And on top of some amazing announcements, Moss by Polyarc was introduced on stage.

“We are designing Moss with the fundamentals that we know make a great action-adventure game while at the same time considering every decision with the unique strengths and opportunities VR offers fully in mind,” said Tam Armstrong, co-founder and CEO of Polyarc. “As a studio dedicated to the new medium of VR, our goal is still the dream we’ve always had as game developers—to create engaging worlds and share them with everyone.”

“In Moss, players can reach out, touch, and interact with the environment while guiding Quill through her journey. As a character within the world, players will work together with Quill to solve puzzles, overcome obstacles, and conquer any danger that comes their way,” said Danny Bulla, co-founder and design director of Polyarc. “As gamers, we’ve been conditioned for years to hold a gamepad in our laps when playing games, letting our thumbs and fingers do the controlling. It has been a great experience to create an immersive game that encourages players to reach into and interact with a tactile world.”