Pokemon Go created something never seen before in the mobile gaming app industry (in terms of popularity). The world went into a frenzy where millions of people simultaneously went outside trying to catch the digital Pokemon. Hoards of crowds gathered in public areas from morning til dusk trying to catch rare Pokemon such as Charizard, Blastoise, and Dragonite. The idea was fresh, using AR technology to display Pokemon in public areas throughout the world. But due to its massive popularity, Niantic Labs couldn’t keep up with the demand on their servers which led to a drop in their user base.

But today, we’ve learned that Pokemon Go has passed the $1 billion in revenue mark since day its first day of release (according to Sensor Tower). And this was achieved in just a 7 month time frame. Mobile app companies have never seen anything close to this level of success before. This single app by Pokemon and Niantic Labs led to industries diving into AR technology. 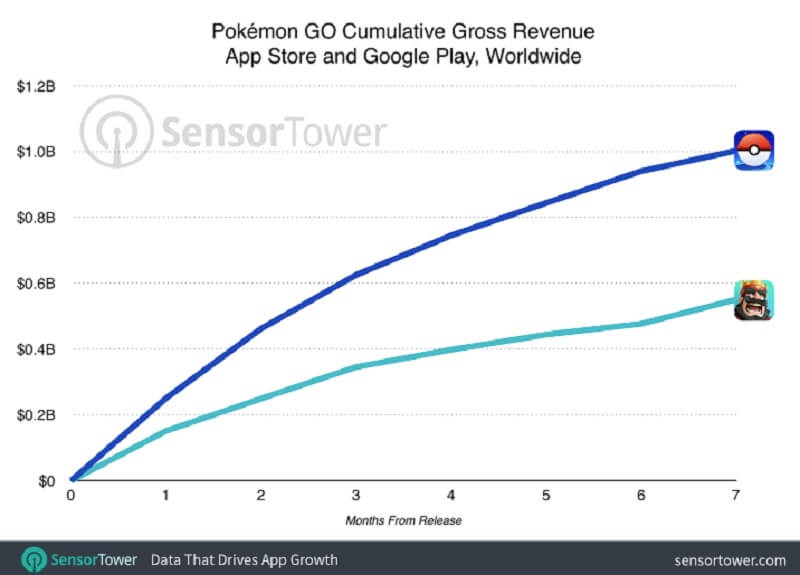 The next closest app in comparison was Supercell’s Clash Royale which made a whopping $550 million world wide in its first seven months world wide. The advantage that Pokemon Go had was its already gigantic popularity and hype for the app. Pokemon Go during its first few months of launch had a day where it raked in more than $18 million. We’d imagine that Pokemon could do even better with a release of a console based Pokemon RPG game.