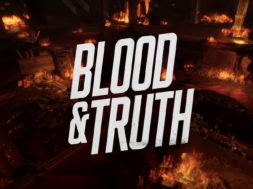 Leading up to Paris Game Week, PlayStation has made and released a bunch of new regarding some upcoming titles. One of the most exciting announcements revolved around the upcoming game, Blood & Truth for PlayStation VR.

Blood & Truth is a follow-up to their demo VR game called The London Heist which featured similar elements as we see with this upcoming game. This title was developed internally by Sony London Studios and will be an exclusive title for PS VR.

In the trailer, we can see it will be played in first-person with more than just shooting. You’ll be able to pick-lock doors, plant bombs, and make evasive decisions. This adds a refreshing element to the game that we don’t often see with other VR titles.

Blood & Truth also looks like it entails locomotion movement rather than teleportation which is exciting to see. You’ll be able to crawl through tight spaces, duck behind objects, and run through windows if necessary.

PlayStation hasn’t released a price or release date for the game but we suspect that it’ll be published some time next year in 2018. While the game shows that it’ll revolve around action, it also seems to be story driven where you’ll have to use stealth tactics to take down the enemies, similar to games such as splinter cell and Metal Gear Solid.