You Can Play This Zelda VR Demo Game Today 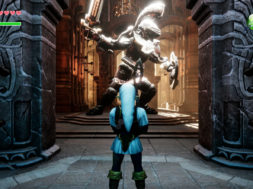 You Can Play This Zelda VR Demo Game Today

We once talked about how awesome it would be to play Zelda in VR. It is a highly popular game from Nintendo that draws in millions of users worldwide. Now, thanks to a YouTuber named Aklar_45 we have a chance to experience Zelda in VR. Users who own an Oculus Rift or HTC Vive headset can experience this demo for free today.

The Zelda VR experience demo has been created using the Unreal Engine 4 engine. You can see how detailed the map looks with replicated designs from the game. Inside the Zelda VR demo, you’ll be exploring a temple where you will find an armored boss that you must defeat.

The enemy boss has an armored shield and sword to take you down. You must slice him down using your swords beam. You can see how the VR game includes both free locomotion and teleportation to move about. This provides choices for you in case you are susceptible to motion sickness.

You can download this particular level of the Zelda VR experience for free today. But this ain’t the only level you can check out in terms of the Zelda VR demo. The YouTuber has also released the volcanic level where you will fight Volvagia.

Instead of using a sword, you’ll be using a hammer and arrow to take down the boss. The flying volcanic dragon will appear from one of the holes where you must take him down before he takes you down. You can also download this Zelda VR demo for free.

The YouTuber has also recreated the battle with Ganondorf but that doesn’t seem like it has been recreated in VR. But you can still check out the video. Who knows, maybe he will recreate this level in VR as it would be an epic battle.

These Zelda VR demo experiences are fan made. They are not an official release from Nintendo so we don’t know how long these demos will be available.