Play Against A PC Opponent In SMUSH.TV For Virtual Reality 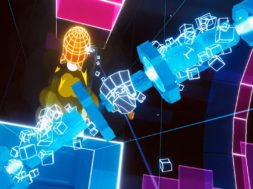 Play Against A PC Opponent In SMUSH.TV For Virtual Reality

For the most part, virtual reality games haven’t been able to create a competitive game between regular PC players and VR players. But with SMUSH.TV by Cyberian Studios, all that changes.

In this unique competitive game, VR players will be challenging PC players in a fast rhythm-base combat game. As a VR player your goal is to dodge the oncoming blocks that are being sent to you by the PC player to squish you. There will be giant blocks being sent down from the top.

Also, a unique feature of the game includes being able to play the game from the same PC. VR players will be able to utilize the PC and have a friend join you rather than having to have a different rig which is an interesting component.

SMUSH.TV is set to release in the next few days on the Valve Index, HTC Vive, and Oculus Rift. What are your thoughts on the game? Let us know.