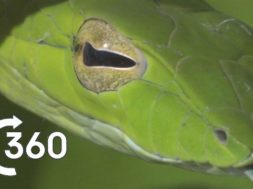 Planet Earth II has been releasing some spectacular episodes about our planet and the creatures that roam this world. The Documentary team has worked hard to deliver these quality videos and the one above is no exception.

In this particular 360 video you get to explore the Costa Rican jungles in 360 VR. Surrounded by the lush rain forest and the camouflaged animals, you’ll be at the epicenter of the video learning about different species of animals and the different types of creatures that inhabit the terrain.

The first animal it describes is the Green Vine Snake. It’s an Arboreal Colubrid located in Central America and Northern South America regions. Here, you explore and learn about how the snake functions in a lush jungle such as this one. The producers purposed the video to give an in-depth description to the creature with images and notations in the 360 space. With the turn of the camera, you’ll notice how well the snake blends in with the environment. As further you get along in the video you’ll learn about other creatures such as the Brown Basilisk and the fascinating features of the creature.

Planet Earth II has produced a highly interactive video with the use of 360 technology. They provide the audience a way to interact with the video that isn’t possible in traditional formats. You’re given a more in-depth perception of the environment and the creatures that inhabit the location with the power to scroll and see in all angles.

This is one of many that BBC plans to release and can be viewed in VR with the use of the Google Daydream headset.