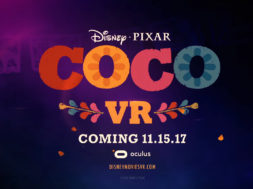 Pixar looks to make an entrance into VR this year by releasing their first VR title, Coco VR. This will be a story driven experience that revolves around the theme of Dios De Los Muertos (Day of the Dead).

In partnership with Oculus, Coco VR will allow users to experience the story on top of using social VR features, interacting with the world. Coco VR has been produced by Pixar in cooperation with Oculus and help from Magnopus. It will be released on both Gear VR and Oculus Rift on November 22nd which is the same day Coco premieres in movie theaters.

Disney also plans on previewing the experience at select Dia de los Muertos festivities in cities such as Los Angeles, new York, Houston, Dallas, San Antonio, Phoenix, Oakland, and Chicago later this month. Users will be able to take a peek into Coco VR at select Disney stores and theaters around the same time.

There have been many animation studios emerging within the VR industry such as Baobab and Penrose. But with the sudden entrance of Pixar, this may turn into a highly competitive field which will greatly benefit the VR community.

Disney itself is starting to release various titles and immersive experience through different platforms. Most recently, they have announced a partnership with The Void to create a “hyper reality” experience around the Star Wars franchise called Star Wars: Secrets of the Empire. Users will be able to put on an OEM headset which enhances the world around them.

In addition, Disney is releasing an AR game called Star Wars: Jedi Challenges in partnership with Lenovo on their mobile OEM AR headset. In this experience you’ll be able to wield a lightsaber and battle the likes of Kylo Ren in the comfort of your house.

They are also releasing a game through their Marvel franchise called Marvel Powers United VR for the Oculus Rift later this year.