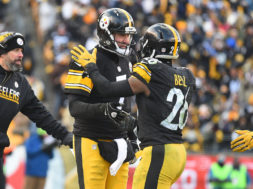 We’ve seen many professional organizations and franchises use virtual reality to help their athletes practice and train. Take the New England Patriots for example. The recent super bowl champs have partnered with STRIVR to help Tom Brady re-visit gameplay and practices in an immersive environment. Now, the Pittsburgh Steelers have also implemented the use of virtual reality technology to help train and practice their players.

In an interview with SiriusXM NFL Radio, offensive coordinator Todd Haley mentioned that they’ll be keeping a close eye on how VR can help with their performance.

“It’s funny you ask, we’ve had those guys info the past week filming and we’re just kind of playing with it a little bit and seeing what happens,” Haley said.

The MC of the program went on to mention how Stanford’s coach recently praised the technology for the variety of uses they can get out of VR. In focus, it helps train quarterbacks with repetition and coaches can use it after practice in order to see what the quarterback saw during plays. Haley responded by saying, “It’s cool stuff, there’s no doubt about it, so, we’ll see where it goes.”

Steelers seem to have recently adopted the technology and haven’t quite used it to its full potential which makes sense since practice camp just started. We’ll stay tuned to see how Ben Roethlisberger feels about using VR to help him train in practice.