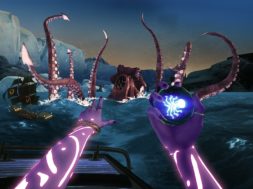 Survios – creators of Raw Data and Creed: Rise to Glory – have finally launched their next big VR game called Battlewake after the buildup this year.

Battlewake is a piate adventure VR game where four ancient, super-powered Pirate Lords fightfor ultimate dominion. you will be controlling a massive battleship where you will navigate the waters and engage in combat using firepower and magic.

The Seas of New Urth constantly churn with the raging surge of battle. The treacherous Queen’s Company has taken your lands, your freedom, your riches, your power. Once squabbling towards extinction, the Pirate Lords now join forces to destroy their common foe, bound in blood by the demon Andromalius. They must regain their seas, avenge their families, take back their riches, and restore their world, with the fate of New Urth hanging in the balance. But will greed prevail?

From the glistening Caribbean waters of the Sea of Enso and the arctic tundra of the Lupin Expanse, to the canopy swamps of subterranean Totec Mires and the fiery tropics of the Ashen Ring, you will fight for your life, chase your dreams, claim your honor, and explore new realms in the world of Battlewake.

Battlewake is now available in VR for $25.49. Make sure to check out the gameplay and witness the magic for yourself.