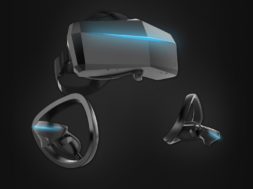 Pimax has brought their big toys to CES 2019 this year by showcasing their full-fledged 8K VR HMD along with their new motion sensor controllers. But one of the more new developments is with the software development side as Pimax has partnered up with Leap Motion and 7invensun technology to bring about what they call the “VR 2.0” era.

According to their press release, “VR 2.0 indicates that the future trend of VR with high resolution, wide field of view (FoV) and a more natural interaction as well as the application of innovative technologies, such as foveated rendering, focal surface displays and wireless transmission, will bring a more immersive experience to users in the virtual world.”

The company believes that in the era of VR 1.0, users suffered from low resolution and narrow FoV, but the Pimax 8K VR headset allows users to experience VR with extensive peripheral vision, whilst solving the problem of the screen door effect.

Pimax also mentioned the foveated rendering technology they are using to reduce GPU load power consumption and dizziness, which brings high viewing performance to VR. Pimax is now closely working with 7invensun focusing on R&D and innovation in eye-tracking technologies to achieve this goal, as well as NVIDIA.

At CES, Pimax will also showcase their new open-palm controllers which will be compatible with the 8K VR HMD. The prototypes on the stand at CES include both the thumbstick and trackpad version, which boast a much more natural fit than previous models and are compatible with multiple devices including the Steam VR tracking 1.0 and 2.0.

Pimax is still continuing to ship their products to the early backers and hopes to achieve their shipping goal this year.