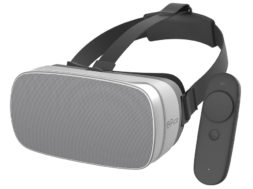 There’s a new headset in town, and guess what? It’s wireless. Joining the race to untethered status is the Pico Goblin. The stand alone HMD is set to debut at E3 this June, and is the next generation of the Pico Neo CV which was introduced at CES this past January.

The Pico Goblin headset features three-degrees-of-freedom (3DoF) head tracking technology, allowing users to roam freely and use a motion controller to navigate within the virtual realm.

“We created the Pico Goblin to liberate people from clunky VR technology,” said Ennin Huang, vice president of design at Pico.“There’s no complex technical set-ups, attached wires or need for a phone. We want to make the barriers to entry for completely standalone VR headsets as low as possible, while offering flexible options for users.”

The headset is powered by a Qualcomm Snapdragon 820 processor with two 70Hz displays which combine to produce a 2.5K resolution screen.

According to Wearable, Pico has said that their Goblin headset “will allow for instant access to VR games, apps and videos, while also adding a portable element through its design.” Pico has also said that they will be launching their own dedicated apps store and working with developers to get software prepped for the platform.

Currently, pricing or purchase information is unavailable, however, according to Wearable, Huang’s indication is that the Goblin will be available for an “affordable price” which we hope means it will be less expensive than its Oculus Rift or HTC Vive competition.