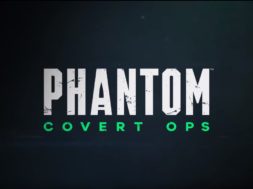 nDreams has recently announced a new upcoming VR game that they are working on called Phantom: Covert Ops. This is a new stealth game from the same developers who have created titles such as Shooty Fruity and The Assembly.

Phantom is an upcoming game specially made for the VR platform. It is said to break “new grounds” by incorporating stealth elements from traditional console games, like sneaking up on guards and working in the shadows, with fresh gameplay mechanics that put a virtual kayak at the center of the action.

Some of the Facebook team have been able to get a firsthand glimpse into the game and have shared what they thought of the developing title.

“I’m only a few minutes into the Metal Gear-meets-kayaking experience, but I’m already getting the hang of paddling through virtual waters, in part because everything works the way I expect it to,” said Juan Castro of the Facebook team. “Sitting in my assault-style kayak, I’m using an oar to paddle forward and can physically reach out for a number of useful objects around my vessel like they’re there in real life.”

Phantom: Covert Ops drops you in the role of an elite special forces operative with one night to prevent a rogue militia from launching a global attack. The game takes place in and around a flooded and abandoned Cold War naval facility, and you explore the waterlogged environment in a military kayak.

“We’re developing Phantom specifically for VR, so you can totally immerse yourself in the virtual world and interact with the game using fully featured motion controls,” said nDreams Game Director Lewis Brundish. “One of the first things we thought about as we began to prototype ideas for our next game was movement — we knew we wanted to create a game where players could move around and explore the environment, and we wanted to make this process as comfortable and immersive as possible.

VR is an incredibly powerful medium for immersing players in the world of the game, and motion controls really make it feel that much more real, letting you reach out and interact with the world as if you’re really there. Moving your character around is usually done by pushing the control stick or pointing at where you want to move and teleporting to the location; these systems are tried and tested and work well, but we wanted to challenge ourselves to come up with a way of moving in VR that would feel just as natural and immersive as reaching out with your real hands.

The kayak was a fantastic solution to this — you move and steer yourself in a kayak using your hands, so we were able to create a way of exploring our world that keeps the player totally immersed and in full 1-to-1 control at all times.

Once we had the movement concept in place, stealth and combat gameplay followed quite naturally. There are many real military units who use kayaks to infiltrate flooded environments, and we took inspiration from them when developing the tone and gameplay. Because the movement of your boat is so directly linked to the motion controls, you’re able to carefully sneak or silently glide through areas very intuitively — your position in the water also provides plenty of natural hiding spots, with reeds to conceal yourself in and plenty of bridges and jetties to take cover under.”

Phantom Covert Ops is set to release on both the Oculus Quest and Rift platform later this year in 2019. Are you ready for a new stealth VR game?