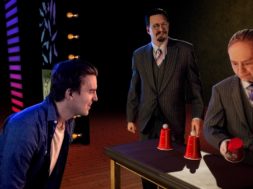 Penn & Teller are part funny and part magicians that have been entertaining millions of people throughout the years. They have a famous TV show and also perform live in front of audiences in Las Vegas. But now they will be taking the stage in virtual reality to get a few “awws” and giggles out of us.

The Penn & Teller VR experience will come with over a dozen magic tricks,
pranks and simulations to fool your friends. And if you know Penn & Teller, they will make sure to leave you bedazzled.

The experience itself will have you learn about the powers of immersion therapy, telekinetic powers, and even some dangerous acts that can only be learned by the best.

The Penn & Teller VR experience is now available on Steam across many platforms including the Oculus Rift, Quest, and HTC Vive for $19.99. There will be a PSVR version as well which will launch on July 6th.

Penn & Teller are some of the most well-known magicians alive today and its going to be quite interesting to see how they can teach us some cool magic tricks in virtual reality.