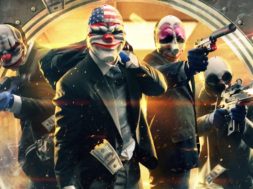 Starbreeze Studios has announced that they’ll be releasing Payday 2 VR on November 16th for the HTC Vive. This comes long after the initial announcement which was made back in May. Payday 2 VR will be free for all owners of the current Payday 2 game.

Tobias from Overkill — creators of Payday 2 VR — stated that the exact number of heists in the first beta period is not yet set. There will be a rollout to Payday 2 VR where every level isn’t available. Each period of the beta will feature additional content and focus on different aspects.

Tobias mentions that Payday 2 VR was developed for the HTC Vive but if there’s enough interest they’ll port it over to Oculus Rift. Overkill chose the HTC Vive for its room-scaling factor. This might happen down the road after the initial beta launch.

One of the cool things about Payday 2 VR is that you’ll be able to cross-play with your friends on either the desktop or VR. Users will be able to synchronously play with one another despite the different platforms which is quite amazing.

Tobias has addressed that they’ll be testing the balance issue with the cross-play to see if either side has an advantage or disadvantage over one another.

Tobias mentioned that players will be “using a system similar to a teleport.” You will choose a location you want to go to and then your character will dash there. That dash will be nearly instant according to the developer. But there will be a range and cooldown for “Dashing.”

Not all weapons will be available during the initial beta launch. Weapons such as the bow will be in development for the VR platform as it requires further work.

This game will provide a refreshing take in VR as it has a large community base that can cross-play with VR users. This means more people and more added attention which was one of the missing pieces in VR. Payday 2 VR will be launching in steam on November 16th. Stay-tuned as we deliver more news on the upcoming title.