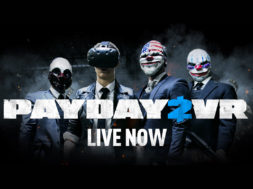 Payday 2 VR definitely drew in some big crowds when it first released on the Steam marketplace. Users who own a copy of Payday 2 got to play the VR version of the game for free alongside traditional PC gamers. While there were kinks and corks throughout the beta trials, the Overkill team was able to iron it out.

Now, Payday 2 VR has exited its beta stages and is available as the full game on Steam with many new updates. “We are now live with PAYDAY 2 VR in the main game, which means no more switching to the Beta branch for our VR players,” said Tobias from the Overkill team. “We have gotten to a point where we need to continue the work integrated into the full game. Therefore we’d like to invite all of you VR heisters to come and try all the cool features we’ve been working on. Heist together with all your Vive, Oculus or Desktop friends.”

The dev team has stated that “nearly the entire game is now unlocked and available to our VR heisters, with a few exceptions that are still in development.” VR users will be able to play all heists with just about every weapon available in the game.

The Overkill team has also released a free DLC for Payday 2 VR users. The new DLC is free and all you need to do is click download on the store page if you own the copy of the game. With the DLC active a new prompt will appear every time you start PAYDAY 2. Here you can choose if you want to play the game in VR or desktop mode.

This popup will appear even if you do not have a VR headset plugged in or Steam VR installed. You can disable the prompt again by deactivating the PAYDAY 2: VR DLC in your list of DLCs in your steam client. You will need to restart the steam client.

The devs have made some significant changes to how the sniper rifles work in the game. Players will get to choose which scope suits their play style. With different magnification levels on the sights, you can now customize your weapon for every situation. In the VR version of the game, you can keep one eye on the enemies and the other on your surroundings.

The new driving system is also very different. You simply grab the steering wheel with the left hand and the accelerator (located by the handbrake) with you right hand. In PAYDAY 2 the cars are automatic, not manual. Push the right hand forward and off you go. The hand break can be activated with the right trigger for some sweet drifting. The system works the same way for motorcycles and boats, except twist the throttle handle to accelerate.

Below are the general update notes from the new full release.