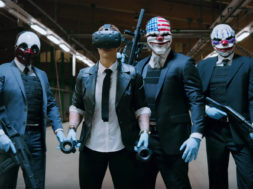 PayDay 2 VR is currently a big hit when it comes to VR gaming. With action-packed content and co-op missions, it provides a thrilling immersive experience. However, some people are finding it a bit of an annoyance when it comes to movement in the game.

Currently, the only way you can move around in the game is by “Dashing” which is essentially teleporting. The game doesn’t allow smooth locomotion without the use of a mod. But that seems to be something that the Overkill team is working diligently on in improving.

In a Twitter conversation with a fan, Karl Lakner, the Art Director at Overkill stated that they are “Working on it (native smooth locomotion) as a top priority.”

Yes. We are working on it as a top priority.

The Overkill team understands that some of the community members are frustrated with the fact that they can’t freely roam around. PayDay 2 VR is currently in Beta and will slowly improve over time to correct some of the flaws we see today in the game.

PayDay 2 VR has been an enjoyable experience thus far and we embrace the continued improvements from the Overkill team.