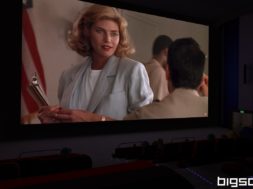 Paramount Pictures has announced a joint partnership with Bigscreen to launch their first VR movie theater. The two companies will allow users to access the VR theater using VR HMDs such as the Oculus Rift, HTC Vive, and Windows VR headsets.

Starting December 29th at 3PM PST | 6PM EST, users will be able to go to Bigscreen’s website and experience Top Gun 3D in the virtual theater. It will be playing for 24 hours straight. Patrons who access Bigscreen will be able to take a seat as you would do in physical brick-and-mortar locations and experience what its like to watch a quality movie in the virtual space.

Paramount Pictures and Bigscreen will even be adding in trailers prior to showing the actual movie as you would experience in real-life settings. Users will be able to chat with one another prior to the start of the movie.

This event is only available to people in the United States, requires a VR headset, and a Windows 10 PC. Supported VR headsets include the Oculus Rift, HTC Vive, all SteamVR-compatible headsets, and all Windows Mixed Reality headsets. Users can view Top Gun for free by downloading Bigscreen’s free application from the Oculus Store, Steam Store, or the Microsoft Store.

Bigscreen has recently raised $11 million in Series A funding led by True Ventures with participation from Andreesen Horowitz where they initially got their $3 million in Seed Funding. As a result, Toni Schneider–Partner at True Ventures–will be joining the board. This brings their total funding to $14 million.

You can currently access Bigscreen on the HTC Vive and Oculus Rift. You can also choose to use Bigscreen through the traditional Windows platform.

This new partnership with Paramount Pictures will provide a fun experience for viewers as they can publicly access a VR movie theater in the virtual space rather than attending a physical brick-and-mortar location.