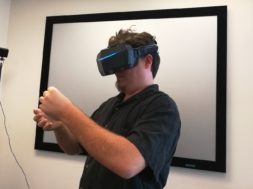 Palmer Luckey, the founder of Oculus VR, has recently tried on the Pimax 8K VR headset. This new HMD has astronomically surpassed its $200,000 goal on Kickstarter with over $1.2 million pledged so far backed by 1,900+ people. With such response from the community, it’s a wonder on how good of a headset the Pimax 8K really is.

According to the Pimax team, Palmer Luckey stated that the “demo was better than he expected.” While it isn’t necessarily a praise, it’s a pretty good indication that Pimax is creating something of value. You have to understand, Palmer Luckey has seen a wide array of VR HMDs and might not be overly impressed anymore with current day headsets.

In the grand scheme of things, the Pimax 8K VR headset will be a generation ahead of the other competitors when it releases with the higher resolution, bigger FOV, and pixel density. They are trying to offer the HMD for around $400 – $500 which is quite competitive with the Vive and Rift.

The Pimax 8K will be compatible with SteamVR and Oculus Home which allows you to choose from an array of games and experiences. They will also use similar base stations and controllers which Valve offers. While the current model uses the Vive-like wands, Pimax will be offering something like the Knuckles controllers at release.

It’ll be interesting to see how the Pimax 8K competes against the likes of HTC, Oculus, HP, Acer, Samsung, LG, Sony, and Asus at release. This holiday season will surely be packed with VR headset options.