Palmer Luckey Talks About Adult VR While Wearing A Bikini 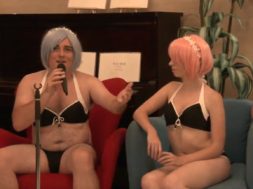 Palmer Luckey Talks About Adult VR While Wearing A Bikini

Palmer Luckey, the founder of Oculus is currently overseas in Japan talking about the state of the VR industry. He recently joined a HentaiVR panel where they talked about various subjects in the vertical all while wearing a bikini.

Palmer Luckey stated that the major hurdle for VR wasn’t the issue of hardware sales but rather the lack of good VR content. There are many solutions and platforms out there but not enough meaningful content to drive the industry forward. However, we’ll soon be seeing the release of 3 AAA VR titles by Bethesda which includes Fallout 4 VR, Skyrim VR, and DOOM VFR.

He also talks about the hurdles that the VR porn industry must overcome. “One thing that I’ve seen in the Adult VR industry is everyone who is experimenting with peripherals is kind of making one piece of peripheral hardware just for their piece of software,” said Palmer. “If we look at the history of all other types of applications we know that it’s important to have things like standards to allow one device to work with many pieces of software. Or one piece of software working with many types of hardware. It’s probably a lot to ask of adult VR industry at this very early stage, but at some point there will have to be standardization between the hardware and the software.”

Palmer also goes on to mention that “VR is actually selling better than the iPod did at the same point in its lifespan.” He talks about many other points so make sure to watch the video in full. While Palmer Luckey is a well-known public figure, he isn’t ashamed of being himself in front of the public.