Palmer Luckey, the founder of Oculus, has been getting blasted by the media for the recent uncovering of him secretly funding one of Trump’s political organizations called Nimble America. It’s classified as a social welfare 501(c)4 non-profit. But we found out that the political organization is driven with mal-intent to trash Hillary Clinton.

The Nimble America association provided Palmer Luckey with a reddit account under the name “NimbleRichMan” to post ridiculous meme’s of Hillary Clinton. The post’s on reddit went along the lines “Too Big to Jail” with her face next to it. But after this being all uncovered, Palmer Luckey is doing a little backtracking, insisting that he just provided the funds.

For those of you that don’t know his background, Palmer Luckey is a very wealthy individual whose net worth is nearly around a billion dollars after selling Oculus to facebook a couple of years back. He still instills the identity of the Oculus brand and the community has been coming down on both Luckey and Oculus. 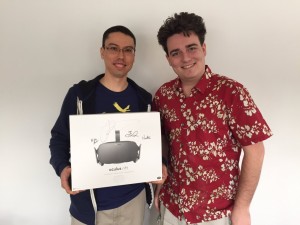 Palmer Luckey has issued a statement on facebook claiming that he did not write under the name “NimbleRichMan” on reddit and that he doesn’t know who deleted that account. He also elaborates on his involvement with the pro Trump political association:

“Here’s more background: I contributed $10,000 to Nimble America because I thought the organization had fresh ideas on how to communicate with young voters through the use of several billboards. I am a libertarian who has publicly supported Ron Paul and Gary Johnson in the past, and I plan on voting for Gary in this election as well.”

Despite his attempted backtracking, companies are now coming out to protest what he’s done. For instance, Polytron, creators of Superhypercube, has cancelled its support for their upcoming game for the Oculus Rift along with other supporters. Also, with Palmer Luckey being associated with facebook, we might see some PR coming from their team shortly.

I'm dropping Oculus support from Tower Underworld Online V due to Palmer Luckey's politics. If you're not familiar with TUOV, ask me.

Until @PalmerLuckey steps down from his position at @oculus, we will be cancelling Oculus support for our games.

Hey @oculus, @PalmerLuckey's actions are unacceptable. NewtonVR will not be supporting the Oculus Touch as long as he is employed there.

Oculus is FAR from the only product on the VR market. And it can just gather dust from now on.