Overkill VR Is The FPS You’ve Been Waiting For 8.5 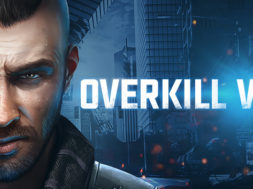 Overkill VR Is The FPS You’ve Been Waiting For

Overkill VR is an outstanding FPS VR Game for the HTC Vive. You get to utilize your movements to shield yourself from the onslaught of enemies. There are a few things that can be found cumbersome such as aiming but overall you'll have a great experience with the game.

We over at VR & FUN have been testing countless VR games through the use of various headsets. Whether it be the HTC Vive, Oculus Rift, Samsung Gear or Daydream View, we thoroughly examine the experience for that particular device. Today, we had the pleasure of testing and playing Overkill VR on the HTC Vive. And my oh my was it exciting.

Overkill VR has many features and attributes that make it stand out from other VR FPS games. The first particular feature that peaked our interest was the ability to use the virtual surroundings. In the game, you’ll notice walls and broken objects in front of you. With the use of the Vive, you can position yourself to be hidden behind the wall so that you can take aim and eliminate your enemies. It creates a certain satisfaction to physically leverage your body rather than moving a joystick to duck and cover. 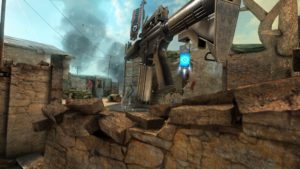 The FPS game also provides you with a variety of arsenals at your disposal. Unlike many VR games and experiences, Game Troopers (Creators of the Overkill VR game), took the time in developing different types of weapons that are fit for particular types of situations. While a shotgun might be good for close combat, you might need to use an assault rifle for distance. Overkill VR did a great job in supplying gamers with the ability to choose from a variety of artillery. 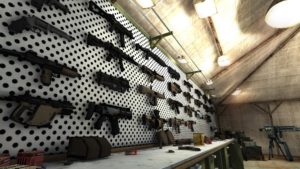 An aspect that might’ve disappointed us was the aiming. While the aim isn’t too terrible, it isn’t that great either. We tested the game with various team members of VR & FUN and we all had a hard time killing our enemies due to inaccuracy. Maybe this means that we just have poor aim but this is something we noticed right away. 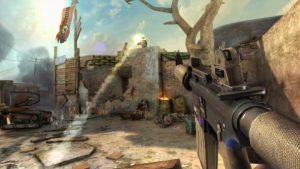 The walls and structures are also on the taller side. You have to be atleast 6’2 or taller to take aim over some of these walls which makes it nearly impossible to shoot down the barrel of the gun. That aspect alone made killing enemies harder by two folds.

But overall, we have to give this game an 8.5 out of 10 for how well the experience is in VR. It’s something we’d highly recommend for HTC Vive owners to check out if you’re into first person shooter games. We don’t know any other FPS game in VR that can currently compete against what Overkill VR offers.

The game will be releasing tomorrow, November 16th for $19.99 on Steam. It’s well priced for the content and is an exclusive on the HTC Vive. We hope you enjoy the experience as much as we did and have a great time shooting down those enemies! Oh and also, be prepared to feel the burn from all the crouching you’ll be doing. You’ll have a great exercise by the time you end the game.