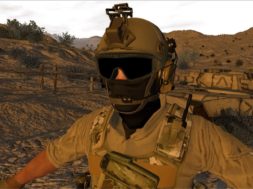 Onward is a multiplayer first person shooter VR game developed by Downpour Interactive. The game was first released on August, 30, 2016 and has garnered hundreds of positive reviews on Steam. From today, September 14th through September 17th, Downpour Interactive has decided to allow steam users to play the VR game for free.

Onward is one of the first VR games that brought together a virtual world where players can cooperate and fight together in a 5 on 5 multiplayer setting.

There are various compelling maps in Onward that allows teams to strategize to defeat opponents. Teams are paired in groups of five where you must eliminate the opposing side. The VR game will allow you to customize weapons so that you have a better grasp of your arsenal. Players will use coordination, communication, and marksmanship skill to complete objectives in online infantry combat.

Something unique about Onward is that it features no HUDs and no crosshairs making the game seem more realistic. So you must practice your aim in the game to get familiar with accuracy in the virtual space. People will also have access to shields to defend themselves from oncoming shots. AR rifles feature scopes that you can use to zoom in and take down your enemies from long distances. The game is also locomotion based rather than teleportation which makes it seem more realistic..

Onward is still in Early Access where Downpour Interactive plans on releasing the full game in the near future. “Onward is still in it’s infancy in terms of overall design, and game modes,” said Downpour Interactive. “Before the game is considered finished, I want to add more scenarios and environments, improve weapon models and sound effects, and better the user experience throughout early access development. The best way to accomplish this is to get this game out to the public for feedback, so that Onward can be the best game it can be!”

Onward is similar to Pavlov VR in some way and different in many others. The game is currently playable on both HTC Vive and Oculus Rift. Make sure to try Onward this weekend if you have yet to do so. After all, it’s free. Also, the game is 20% off making it $19.99 on Steam.