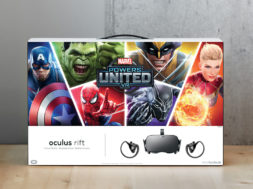 There’s been a lot of hype surrounding the announcement of Marvel Powers United VR. And in a few days, Oculus Rift owners will be able to enjoy the game in VR. And to continue the hype train, Oculus has just released a new trailer for the game which showcases the superheroes and the experience.

Introducing some of the heroes

Frail of body but strong of heart, Steve Rogers was chosen to be part of Operation: Rebirth, a top-secret biological military experiment during World War II. After being injected with a mysterious serum, he emerged with superhuman endurance, strength, and agility as the world’s first Super Soldier! With a strong sense of justice, indomitable will, and indestructible Vibranium shield, Rogers soon became a living symbol of justice, freedom, and liberty

Driven by greed and ego, brilliant but callous neurosurgeon Stephen Strange severely damaged his hands in a debilitating car accident. Traveling the globe in search of a cure, Strange stumbled upon the Tibetan palace of the Ancient One, an aged sorcerer who agreed to impart his knowledge. After embracing an enlightened path, he became the Sorcerer Supreme, dedicated to using his mastery of the mystic arts to protect the world from supernatural threats. Wielding powerful spells like the Bolts of Balthakk and the Daggers of Denak, Doctor Strange rallies his team against dark, otherworldly forces.

The bite from a radioactive spider granted Peter Parker amazing arachnid-like powers. After losing his beloved Uncle Ben to a burglar, grief-stricken Peter learned that with great power, there must also come great responsibility. Using his incredible strength, spider agility, and powerful web shots from his self-invented web shooters, he protects New York City as the Amazing Spider-Man!

Logan was born with amazing abilities, including razor-sharp claws, superhuman senses, and a regenerative healing factor that lets him recover from any wound. A secret government organization abducted him and attempted to create the perfect living weapon by bonding the indestructible metal Adamantium to his skeleton. After escaping from his captors, he joined the X-Men to protect mutantkind—and his lethal close-quarter combat skills make him a key member of any team’s vanguard lineup.

Bobby Drake possesses the ability to lower his external and internal body temperatures to below freezing—and encase himself in a suit of ice. Calling himself Iceman, he can manipulate the moisture in the air around him, freezing and then controlling it in various forms, both offensively and defensively. He follows a hit-and-run tactic in battle, using his Ice Shard projectiles to hit enemies at range and then Ice Surfs across the area to keep enemies off-balance.

Having lived a tumultuous life filled with successes and hardships, Ororo Munroe has earned her rightful place as one of the Marvel Universe’s most powerful beings. From her ancestral heritage as the orphan thief, the princess, the once and future leader of mutantkind, Storm has the ability to control the elemental forces of weather with righteous authority and devastating consequences. Striking out at enemies with lightning or sweeping them aside with large cyclones, she has the power to turn the tide for any team.

Marvel Powers United VR will be releasing on July 26th for $39.99 on the Oculus store for the Rift. The game is not set to release on other platforms such as the HTC Vive.