Today, Oculus unveiled the final iteration of the Oculus Touch controllers to the public including the release date and price.

The Oculus Touch will come with 2 controllers; one for your left hand and one for your right. They’ll be tracking hand motion and distance. Currently the Rift is priced at $599. So bundled together, the whole experience will start at $798.

With the ability to have 2 distinct controllers, it gives the means to having a proper VR experience by becoming more immersed. You’ll have the realistic sense of characteristics of moving 2 hands instead of one with a singular controller. Oculus has been hard at work in developing the Touch for about a year and they’re finally ready to release their solution to the public. Every Touch bundle will come with an extra pair of sensors to create boundaries, similar to the HTC Vive, which was lacking on the Rift. 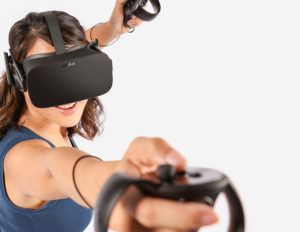 At this year’s Oculus Connect 3 event (taking place as we speak), they let us know that they’ll be delivering some exciting new titles that are taylor made for the new arriving controllers in partnership with companies such as Insomniac Games. We look forward to the VR experiences that the Oculus Touch will be able to deliver in the near future