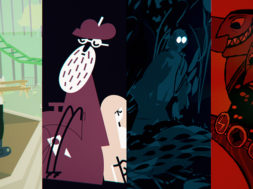 Oculus has been bombarding the VR community with some terrific announcements, price reductions, deals, and exclusives throughout the past week. They’ve reduced the cost of the Rift bundle by $200 on top of releasing the first AAA VR game called Robo Recall. The VR company has one more big announcement for us coming from their Oculus Story Studios where they’ve announced their new illustrative VR project called Talking with Ghosts.

This VR project will be a compilation of many 3D illustrations used to create a story. Everything was virtually crafted using Oculus’s 3D VR art medium called Quill. Talking with Ghosts will feature four, short ghost stories with Fairground by Sophia Foster-Dimino, The Neighborhood by Roman Muradov, The Reservoir by Ric Carrasquillo, and Tattoo Warrior by Maria Yi.

Fairground will be about two childhood friends that revisit an old fairground. When they arrive, their divergent interpretations of the past and future collide.

The Neighborhood is about a ghost’s tale of his relationships with the house’s tenants. It ranges from beginning of time until the end of our universe.

The Reservoir is about a couple’s relationship drama that unfolds as they play the most surreal game of mini golf. Quite extreme.

Tattoo Warrior will be a story about war and love, interpreted entirely through a 3D tattoo ribbon.

“We love comics at Story Studio. Dear Angelica helped us learn what it would feel like to be inside a painting. Now, Talking with Ghosts takes us inside the pages of a comic for an immersive experience unlike anything we’ve ever seen.

With Dear Angelica, we pioneered a new form of storytelling, shared everything we learned with the VR filmmaking community, and sparked excitement for a growing industry. Now, we want to make it easier for artists to tell their stories in VR without massive teams. To do that, we need to revolutionize not only what we create, but how we create it.

We believe the best way to make a VR experience is inside VR, unencumbered by the tools of the past, and we’re excited to share the latest results at Tribeca to help inspire other artists.

We’re still in the early stages of made-in-VR illustrative storytelling. We can’t wait to see what the VR filmmaking community does with Quill in the coming years.”