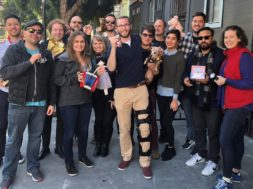 In an exciting turn of events, former employees at Oculus Story Studio have come together to announce that they’ll be launching a new and exciting startup company called Fable Studio. The newly formed studio will officially launch with the premiere of “Wolves In The Walls (Chapter 1)” at Sundance on Friday January 19th.

Wolves In The Walls began production at Oculus Story Studio shortly after production wrapped on Henry in early 2015 and is the first project to approach the problem of a deeply interactive character – Lucy – the main character of Wolves In The Walls. This new VR story is an Oculus Studios supported project, meaning that the current and former Oculus team members are still willing to work together.

One of the cool elements about Lucy is that she can remember and callback to actions you’ve taken in a story, be handed and hand you objects, be interrupted credibly and have a hierarchy of emotions toward different objects. In addition to Wolves In The Wall, Fable has four upcoming projects that will all explore different elements of VR.

Users will be charged for all Fable Studio projects and the studio hopes to kick start a new phase in VR movies of charging for content and seeking to breakeven. Fable projects will be charged at a rate of $1 for every 10 minutes of content – so a 20-minute piece would cost $2 as opposed to previous VR movie industry experiments charging $1 for 1 minute.

Upcoming projects from Fable Studio include:

Magic River Boat Ride – an animated made in VR experience.

All of these projects apart from Wolves In The Wall (which was begun before Quill was developed) are hand made in VR using Quill and other made in VR tools. We look forward to seeing how Fable Studio will make an impact in VR.