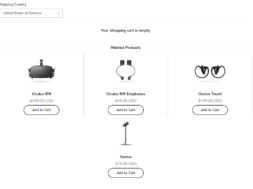 Oculus has finally released a way to purchase individual items. Through the Oculus store, you’re able to purchase specific products like the sensor from the Rift bundle. The sensor is the part that creates the 3D space for the Rift. It tracks the distance in space of where the Rift headset is from the sensor. However, it isn’t able to achieve room scale. But in the future, Oculus wants Rift users to be able to create boundaries, similar to the way the HTC Vive does with their 2 sensors.

The Oculus Sensors are available for purchase at $79. The expected shipping date is set between Dec 13 – 20. With the combination of multiple sensors, Facebook will create an elastic boundary for their answer to room scale.

You can also buy products such as the Oculus Touch for $199 which is expected to ship in early December. These new controllers will be motion tracked and allow you to experience VR in a more immersive manner. You can also order the Oculus Rift Earphones which are supposed to create a 3D experience within the realm of sound.

With these new products now available for order individually, we’ll be seeing some true competition between the HTC Vive and Facebook’s Oculus Rift.