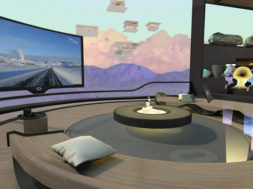 Oculus has finally launched their long awaited social VR platform “Rooms” for the Samsung Gear VR. As described, it’s a place where you and your friends can gather in VR. Similar to Altspace VR, you’ll be able to choose avatars but have limited abilities to roam in a confined space. The Rooms experience will also provide a group of friends with social activities such as watching the virtual TV together, play guessing games, or jump to multiplayer games within the Oculus world. “Rooms” is expected to be released on the Rift in early 2017.

“The first wave of VR was all about the magic of presence, the immersive sense of actually being inside a virtual space. The next step is to let you feel that same sense of presence with other people in VR.” – Oculus

The Oculus team’s goal from the beginning was to ease the consumer base into VR starting with experimentations in presence. After time to exposure to the virtual world, the next goal is to develop upon that presence with friends (which is the ultimate goal for Facebook, the largest social platform).

With “Parties” you’ll be able to voice call up to 3 friends from anywhere in VR. With the use of the Samsung Gear VR headset you can dial your friends who are available in the virtual Oculus world.

In the GIF you can see how Oculus made it simple to start a voice chat with your friends. It’s a pretty useful gadget for people who like to stay in contact with friends that are in other VR simulations and games (similar to how Discord and Skype is used today).

Oculus has also informed us that there will be more apps to support this feature in the coming months. Facebook will be gearing up to make VR the largest social platform starting 2017.