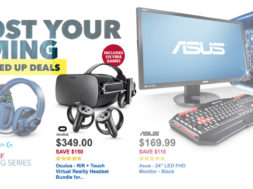 Can you believe it? Oculus will be offering another amazing sale on their Rift headset this year during Black Friday. The company has provided consumers with awesome deals throughout the year and they look to go out with a bang by offering the Oculus Rift + Touch bundle + 6 VR games for $349.99.

The offering will be available at Best Buy from November 23 – 25th. What we know so far is that the Oculus Rift + Touch bundle will be available in store throughout that 3 day window and guessing the prices will be at $349.99 while supplies last.

Usually, Best Buy is a banging spot when it comes to Black Friday deals. Currently, the headset is offered at $399.99 for the bundle so you will be seeing a savings of $50. The cool perk to this deal is that you’ll get 6 free games when you purchase the bundle.

Best Buy has also listed a VR ready PC bundle by IBuyPower for those interested in purchasing a computer. Currently the PC is listed at $1,099.99 but will be offered at $899.99 during Black Friday.

If you’re wanting to get into VR, this might be the optimal time as you’ll be seeing a bit of savings for PCs and the Oculus Rift headset. This is the best Oculus Rift Black Friday sale.