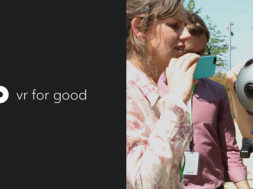 Oculus is shifting dynamics within their company to focus their attention in different areas of growth. The company has recently shut down Oculus Story Studio to invest in the outside community and third party content creators. And to further grow the VR community Oculus has announced the launch of VR for Good’s 2017 Creators Lab program.

This is a new initiative by the company which will help bring new voices to the field of VR content creation. By shutting down their own content creating studio Oculus is able to allocate $50 million in funding the development of non-gaming, experiential VR content. Creators Lab aims to pair “10 up-and-coming filmmakers with 10 unique causes” to create great VR experiences that showcase the need for social change.

Now in its second year, Creators Lab pairs up-and-coming filmmakers with unique causes to create transformative VR experiences that showcase the need for social change in breakthrough ways. Just within its first year, Step to the Line premiered at Tribeca, while nine of the first films produced through the program were accepted into some of the world’s most recognizable film festivals in 2017.

Through Creators Lab, we work directly with people who champion various causes to illustrate how beautiful and moving VR experiences can change our perspectives and motivate action. We also challenge and support our creators to tell stories anyone can appreciate, regardless of their stance on a particular issue.

From the claustrophobia of a confined cell to the experience of standing side-by-side with people you might never otherwise have met, it challenges our preconceived notions and highlights the systemic inequalities behind our criminal justice system. Rather than dictating its message, Step to the Line lets you feel what it’s like to have hope behind bars—and that subtlety is where the real magic lies.

We’re excited to provide even more organizations working to improve the world with a unique and compelling avenue to tell their stories while supporting the creation—and creators—of socially relevant VR experiences.

With this new program, Oculus will be able to support the creative minds and content creators around the world get their stories on to the VR platform. Oculus will shortly announce how to apply to the Creators Lab program so stay tuned as we’ll be updating this post with the link.