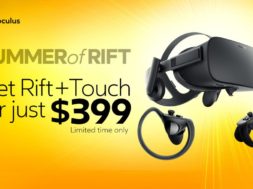 Update: The Oculus team has announced that The Summer of Rift sale will last a few weeks longer due to high demand of their VR headsets.

Due to high demand, and the resulting switch to the all-in-one Rift+Touch package, Oculus is extending the sale by a few weeks to make sure everyone can take advantage of the Summer of Rift promotion.

While they haven’t provided us with a hard date on when the sale will end, we now know that the Rift bundle sale will most likely last past the month of August and into September. The original cost of the headset was around 800 (including Oculus Rift + Touch). The sale cuts that price down to %50, which is quite extraordinary.

Oculus has once again blown our minds with a ridiculously insane deal for the Rift headset bundle just moments ago. They are now offering their premium PC based VR headset along with 2x sensors, Touch controllers, Xbox One controller, remote, cables, and seven free titles available when you set up Rift+Touch, including Lucky’s Tale, Medium, Toybox, Quill, Dead and Buried, Dragon Front, and Robo Recall. This is all included for the low price of $399.

This price drop is quite extraordinary as the same bundle was offered for $599 just a couple of months ago. And not only are you getting a headset, but you’re also getting some of the hottest games available on the market. Robo Recall, Dragon Front, and Lucky’s Tale are all heavy hitters in the virtual world with high reviews.

While the bundle doesn’t offer the third sensor for room-scale VR experiences, this is the best priced deal right now on the market. If your one of the curious folks who’s been trying to see what VR is all about, this would be the perfect time to purchase the Rift bundle while sales last.