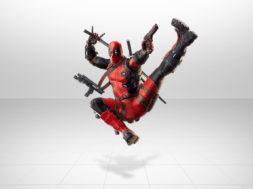 Oculus has provided us with an update that Deadpool will be joining the recently announced VR title, Marvel Powers United VR prior to the start of San Diego Comic Con (SDCC). Fans of the Marvel universe will have the chance to demo this upcoming VR game at SDCC and become one with the friendly neighborhood mercenary.

Deadpool joins the short list of super heroes that’s been announced for the game including Captain Marvel, Hulk, and Rocket Raccoon. Users who play as Deadpool will be equipped with his signature dual-katanas and his deadly hand cannon pistols. You’ll also have access to his loaded SMGs to quickly spray down enemies that come between you and your mission.

For anyone that’s unfamiliar with the news, Oculus and Disney announced Marvel Powers United VR at this year’s D23 expo. The game will put up to four players in control of their favorite Marvel heroes as they fight together to take out infamous Marvel villains. You will be completing missions along the journey while competing for the highest score.

We’re looking forward to seeing what types of skins and updates will be available for Deadpool. For anyone interested in trying out the demo at this year’s SDCC, head over to the Marvel Booth to play Marve Powers United VR before anyone else.