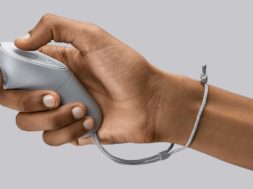 A couple weeks back, some of the Facebook team members indicated that they will be announcing their biggest VR/AR news at the upcoming F8 conference in May. This includes the VP of VR/AR at Facebook, Andrew Bosworth, who states that they’ll be sharing their “biggest AR/VR news to date.”

Under 70 days to go until our biggest F8 to date — where we'll share the biggest AR/VR news from Facebook to date. https://t.co/hHXeEIdJaW

According to reports by Variety, the big VR/AR news might have to do with the upcoming standalone headset, the Oculus Go. This is according to their sources who have knowledge of Facebook’s plans. Priced at $199, this new headset by Oculus is supposed to deliver 3DoF VR experience without using a smartphone nor a PC.

We managed to grab some of the raw images which also indicates that it’ll have 32GB of internal memory. While that isn’t too much storage space, Oculus might be offering their users to hold more memory via the cloud.

If this is indeed the big announcement by Oculus/Facebook, it would rather be a letdown considering this isn’t the next  flagship hardware. But there is still hope to hold on to as Boz indicated “AR/VR” news. This means that they’ll be talking about the augmented reality side as well.

On top of that Facebook is more likely to talk about a future integration with the immersive platforms rather than aim for a new hardware introduction as a highlight. And if anything was to make a splash, it would revolve around the Santa Cruz headset instead which is suppose to provide a 6DoF experience with a more powerful chip on board. The Santa Cruz headsets have already been shipped to developers to test so it isn’t too far away from launch.

tags: boz f8 facebook Oculus oculus go oculus santa cruz
previous Payday 2 VR Exits Beta And Is Now Available As a Full Release With Many New Updates
next What You Need To Know Before Going To Watch Ready Player One
Related Posts