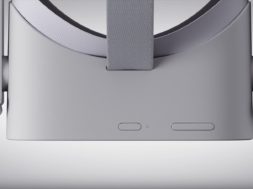 Facebook will now be heavily pushing their next VR headset called the Oculus Go to the masses. Starting at $199, the mobile VR headset is set to deliver quality virtual experiences at an affordable price point.

The Oculus Go offers a 3DoF VR experience powered by the Qualcomm Snapdragon 821 chip. This headset will offer users a way to enter VR without being plugged into the PC nor a mobile device. Oculus Go is an all-in-one package that is set to deliver high quality VR content. The headset is designed with breathable fabrics, adjustable straps, and Oculus’s best lenses.

F8 attendees will all be receiving a free Oculus Go headsets from Facebook starting tomorrow, May 2nd at 2PM PST. Facebook is set to deliver a lengthy keynote speech about their future with VR and how the Oculus Go will create an impact in the marketplace.

·      Over 1,000 Games and Experiences to explore including titles such as Anshar Online, They Suspect Nothing and Space Explorers (NASA), amongst others.

·      An update to Oculus Rooms with a fully redesigned and customizable environment, more life-like avatars and the ability to watch full-length movies from among the hundreds of top titles in the Oculus Store. We’re also bringing Hasbro games to Rooms: Boggle joins the platform this month, with Monopoly + Trivial Pursuit brand experiences coming later.

·      Oculus TV is a brand-new way to experience your favorite serialized content. A custom-built 3D environment with a massive screen and virtual seating area, Oculus TV also serves as a convenient hub to launch your favorite individual VR entertainment apps, like Netflix, Hulu, and SHOWTIME.

·      Oculus Venues, where you can watch live concerts, sports, comedy shows, and other events with your closest friends and an audience of thousands of people around the world (available beginning May 30).

Oculus CTO John Carmack stated back in February that the Oculus Go headset will perform better than the Samsung Galaxy S7 smartphone that’s compatible to the Gear VR.

In order to use the Oculus Go headset, you will have to pair it with your phone to download an app for the HMD. But you won’t have to stick the phone and its display into the headset. You can currently pre-order the Oculus Go on Amazon but some select Best Buy stores are selling the headset at physical locations.