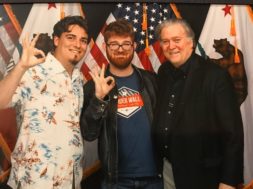 Palmer Luckey is in the midst of building up a defense startup company called Anduril which will be using VR to enhance our military technology.

While on this exploratory journey, Luckey has managed to align himself with various supporters of the Trump administration including Trae Stephens who was the managing partner at the Founder Fund alongside Peter Thiel. Stephens was also appointed to Trump’s defense transition team earlier this year. Now he is one of the early members at Anduril.

Palmer Luckey has been a big supporter of Donald Trump and his party. He’s donated funds to a pro-Trump party on Reddit and also donated $100,000 to fund Donald Trump’s inaugural celebrations through a shell company named after the classic video game, Chrono Trigger.

Most recently though, Luckey has been seen posing with Chuck C. Johnson and Steve Bannon who are known to be anti-semitic and white supremacists. Steve Bannon is the chairman of Breitbart news, a media outlet that runs racist columns against other ethnicities and religions while in support of trump.

Chuck C. Johnson is an infamous keyboard warrior and internet troll who’s been banned by Twitter 25 times for his racist and rude remarks. So why is Palmer Luckey posing with these two racist individuals? Well, because they both have affiliations with Trump and his administration.

At the beginning of this year, Donald Trump reorganized the National Security Council (NCS) by elevating Steve Bannon from chief strategist to a member of NCS’s principal’s committee which is the top interagency group for discussing national security.

The NSC is the staff inside the White House that coordinates with the president in making deliverable decisions including the State Department and the Pentagon.

As far as Chuck C. Johnson goes, he stated that he was “Doing a lot of the vetting” for the Trump administration during their transition period. He was supposedly an important figure on team Trump and was able to influencing decisions.

Luckey now seems to be aligned with the major influencers of the Trump administration that has major backing into the defense sector of the United States of America. With Anduril moving full steam ahead, there will probably be a lot of integration with VR technology being used on the battlefields in the foreseeable future if they were to align with the decision makers of the U.S. military. But the challenging question is at what cost?