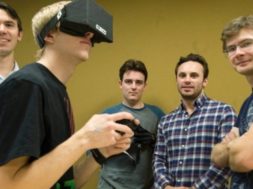 Chris Dycus, hardware engineer at Facebook’s Oculus, left the company he helped establish for a new opportunity that he “just can’t pass up”. Dycus has been at Oculus since 2012, while it was still a startup. He was hired around the time of Oculus’ historic Kickstarter campaign for the Rift VR headset, which raised over $2 million.

Dycus was the company’s first employee, hired by founders like Brendan Iribe, Nate Mitchell, and Palmer Luckey (who also left Oculus this year), prior to it’s acquisition by Facebook in 2014. It is rumored that Dycus was hired by Palmer Luckey directly and that the two were longtime friends prior to Dycus’ hire. 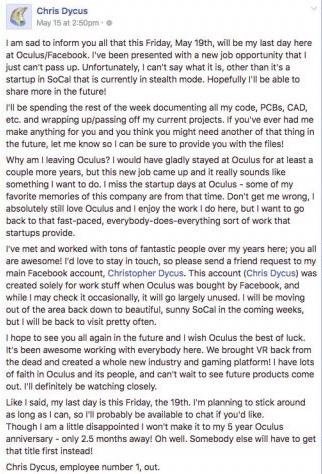 Oculus has seen quite a bit of change this year, with some negative tones woven in. Oculus faced some negative feedback from developers and consumers when the Rift headset launch shipment experienced problems and when the company decided to lock away games for exclusivity details. Additionally, Palmer Lucky’s departure was extremely controversial and highly publicized, as he was accused of funding a Clinton political smear campaign.

Despite those issues, it seems that Dycus is leaving on amicable terms. He has stated that he wishes Oculus the best of luck and expressed disappointment that he will not reach his 5 year Oculus anniversary. The statement leads us to believe there is no bad blood. He mentioned that he missed the “fast-paced, everybody-does-everything sort of work that startups provide.”

Facebook has not issued any formal comment on Dycus’ departure. The company did confirm that he had left, and that he was the first company employee after the founders. His new company and project is in stealth mode in Southern California, so there is no more information on Dycus’ new employer, role, or future plans. We are certainly excited to see what he’s up to when the project comes out of stealth mode.