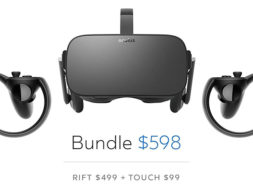 Oculus has announced that they’ll be cutting prices on the Oculus Rift and the Oculus Touch by $100. This brings the bundle price point down to $600 which is quite big! Oculus has made it clear that the company is determined to make their VR bundle more affordable for the general public. By slashing $200 from their original price point, it definitely shows the companies initiative in trying to accomplish that mission. In an open letter, Jason Rubin, Oculus VP of content stated the following.

Today we took a major step in bringing PC VR to a broader audience. We’ve brought the all-in price of Rift and Touch to $598—driving down the price by $200—and announced a bunch of new content for 2017. We’ve always been aggressive in driving VR forward, and today VR and the development community have hit another huge milestone.

After launching VR into a hype cycle generated outside of the industry, we’ve recently seen some of those same voices shift to predictions of VR doom and gloom. We believe these stories are as overblown as the initial hype, and we still believe in VR’s unlimited long-term potential. Today we’re taking a material leap forward thanks to two things: price and timing.

Let’s start with price. We’ve read all the stories and looked at the analyst reports. VR is going through the normal adoption cycle for new pieces of technology. We saw hype into launch, facing impossible expectations, and we will eventually break out with the “hockey stick” of mass adoption.

Oculus believes, as do the thousands of original Kickstarter backers and millions of current users, that VR is the next computing platform. We also know that if there aren’t major investments made to the ecosystem, it’s going to take a really long time to reach that eventuality. So today, Oculus is aggressively making the high end of VR more attainable.

We know this from responses to hundreds of thousands of surveys taken at our retail demo locations, as well as from empirical evidence before us: Console VR is less expensive and currently outselling PC VR, and even less expensive Mobile VR headsets, like our Gear VR device, are outselling Console VR. Bringing the higher quality of PC VR toward these lower price points is an obvious win for both consumers and PC VR. This price drop was as inevitable as it is beneficial. This is how the technology business works.

Today’s new, lower price of Rift and Touch doubles down on a year of dropping PC and graphics card prices. It’s costs 30% less for someone to walk into a store and outfit a complete high end PC VR experience, including desktop PC, Rift, and Touch, than it did just a year ago when we launched Rift.

We believe this lower entry price will attract consumers to PC VR at a faster pace. This is universally good for the entire community, but especially for developers. A larger userbase means higher potential sales, easier player matching, better communities, and results in the ability to invest more in titles. This increased investment means better software which in turn brings more consumers. This virtuous cycle is the fuel that can launch PC VR.”

With all the fiasco going on with the ZeniMax lawsuit and the VR content war, it’s good to see that Oculus is still on a mission to accomplish this goal.