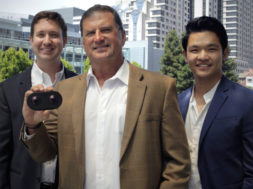 Lucid VR, a startup VR company, has announced that they’ll be bringing on Oculus Co-Founder Jack McCauley as its Chief Engineer who will help re-imagine their products such as the LucidCam for the consumer market. McCauley, who’s credited in designing some of the hardware for Guitar Hero, was with Oculus all the way until Facebook acquired the company back in 2014 for $2 billion. Lucid VR and McCauley hopes to bring that level of success to the company.

“We are very excited to welcome Jack to the team, as his experience ramping up Oculus and its [production] will help us dramatically improve our manufacturing capabilities,” said Han Jin, CEO of Lucid VR.

Lucid VR is currently concentrated on delivering a pocket sized 180 VR camera solution called LucidCam for people on the go. The technology currently allows stereoscopic and 3D vision where you can experience depth to your video content. The camera can be controlled and operated from any smart phone.

LucidCam features dual lenses and advanced processing capture the world just like human eyes in true 3D VR. Currently, the device is priced at $499 with expected shipping set for some time in August.

The reason why Lucid VR went with the 180 cameras rather than 360 is because it allows for true stereoscopic and 3D vision. “The industry incorrectly believed that 360-degree cameras were the way to go,” said McCauley.

Lucid VR stated that they’ve exhausted their ability to supply enough cameras in their pre-orders and looks to sell million in the near future. They’ve also hinted at a follow-up version to LucidCam, although no further details were provided.