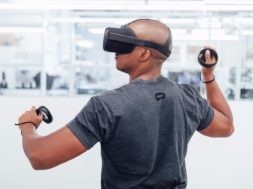 The Oculus team has been vigorously working on developing their next upcoming VR headset called the Santa Cruz for a couple of years now. The Santa Cruz is a standalone 6DoF headset that’s set to provide the second generation VR experience without being tethered to PCs or smartphones.

While Oculus did did provide some updates last year at the OC4 event, there hasn’t been much news about it until now. According to our sources, some of our developer friends have recently received their Oculus Santa Cruz headsets.

The Santa Cruz comes equipped with newly redesigned motion sensor controllers that are a bit different to the Oculus Touch. The goal for this next generation headset is to provide immersive VR experiences that are nearly as good as the ones you would see on the Oculus Rift.

“Ever since building Rift, our dream has been to bring the magic of a PC VR experience to an untethered form factor. That’s why we were so excited to share our early work with Santa Cruz at Oculus Connect last year. Although that first prototype had a full-blown mobile computer strapped to the back of your head, the feeling of freedom you got when first experiencing fully untethered positionally-tracked VR remains unparalleled.

Today, we showed the next phase of Santa Cruz development, delivering hand presence with two positionally tracked controllers. This is an important, industry-first milestone that brings the magic and incredible design expertise of Touch into a completely standalone experience.

We leverage the same constellation tracking technology that we developed for Rift and Touch. Getting the infrared LEDs on our new Santa Cruz controllers to work with the sensors used for inside-out tracking on the headset was a significant computer vision, design, and engineering problem. This is a milestone we’re proud of. By using four ultra-wide sensors, we achieved a large controller tracking volume, allowing for natural and unrestricted movement.”

We can’t really say what the specs are for the upcoming Santa Cruz headset but it’ll definitely pack a punch. It will somewhat rival the recently announced Vive Focus headset that was released in the China market. The HTC headset will be making its way stateside some time this year as well.

With developers now receiving their Santa Cruz VR headsets, it means we are getting pretty close to that big announcement by Oculus on a release date. Facebook has recently announced that it’ll be making its biggest VR/AR reveal during F8 in May and that might have something to do with it.

The Santa Cruz will be one step up above the Oculus Go and we expect to see a lot of innovation happening over the course of 2018 – 2019.