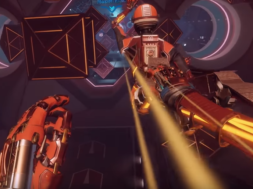 Wishes have been granted, Echo Arena is coming back for a second open beta weekend from July 6 – July 10 according to Oculus. This promising new VR title by Ready At Dawn studios has been living up to the hype, delivering a unique play-style with astounding visuals.

For those of you that have yet to play the game, we’ve recently made a review on why Echo Arena stands out from other VR games today. In short, the game puts you in outer space in Zero-G conditions where you must compete against the opposing team to rack up as many points as you can by throwing a disc into the opponent’s goal.

We found that the mechanics in the game was fluid during the first open beta weekend. Controls and buttons seemed to be well thought out for allowing you to take quick actions in the space arena.

Echo Arena will be officially releasing for the Rift on July 20 alongside the narrative-driven space adventure, Lone Echo. The game can be pre-ordered today at a promotional price of $34.99.

Additionally, Oculus is teaming up with ESL and Intel to bring Echo Arena into the esports circuit. Next year in Poland, they’ll be launching a new event called VR Challenger League where the best teams will be competing against another with an expected $200,000 in prizes. Brackets will begin shortly after the July 20th launch.