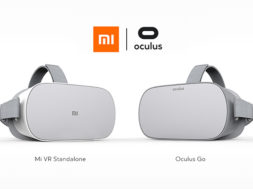 Oculus has announced a new partnership with Xiaomi and Qualcomm at CES 2018 for the Oculus Go headset. Using the technology from the two partner companies, Oculus looks to push their 3DoF standalone VR headset to the worldwide market in the near future.

“We’re working with Xiaomi as our hardware partner for the global launch of Oculus Go and are also jointly announcing Mi VR Standalone—a VR headset based on Oculus technology exclusively for the Chinese market,” said the Oculus team.

Features Qualcomm Kryo CPU with speeds up to 2.4GHz.

“We’ve worked closely with Qualcomm to deliver the highest possible level of performance to meet the high computing demands of the standalone VR product category,” said the Oculus team.

Mi VR Standalone will share the same core hardware features and design as Oculus Go and support the Oculus Mobile SDK, enabling existing Oculus developers to easily bring their content to the Mi VR platform in China. This will help Oculus branch out to a foreign market that has a high vested interest in immersive VR technology.

Xiaomi is working directly with Oculus developers to localize some of the most popular content from the Oculus Store and to bring it to the Mi VR Store in China through this newfound partnership. Last year, Oculus stated that they will be selling the Oculus Go headset for $199.