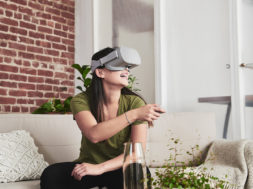 Oculus has announced a new standalone VR headset called Oculus Go. While the specifications are yet unannounced, we are supposed to get a taste of the headset some time next year.

This headset will offer users a way to enter VR without being plugged into the PC nor a mobile device. Oculus Go is an all-in-one package that is set to deliver high quality content. The headset is designed with breathabe fabrics, adjustable straps, and Oculus’s best lenses.

The Oculus Go will feature a high-resolution fast-switch LCD screen which dramatically improves visual clarity and reduces screen door effect. And the next-generation lenses will provide a wide field of view with significantly reduced glare.

Oculus Go also ships with integrated spatial audio. The speakers are built right into the headset, transporting you straight into VR and making the headset easy to share with someone else. There’s also a standard a 3.5mm headphone jack available for private listening.

The headset is priced at $199 and is set to release early next year in 2018. Oculus will still working on the Santa Cruz standalone VR headset which is said to deliver 6DoF in addition to new motion sensor controllers.

Currently, there is a large list of titles that’ll be available for the Oculus Go. Below will be the games available at initial launch: